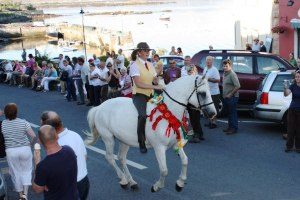 2016 Show Cancelled The Pony Showing Season of 2016 reaches its pinnacle at the Annual Supreme Champion of Champions Show where 1st place winners of 2016 Connemara Pony classes countrywide compete for the title of Supreme Champion.

The quality of Connemara Ponies on display is the highest of any show of the season. This is an opportunity to see the very best of the breed from all over the country and round off the pony showing season on a high. The Grand Finale is the Champions Parade through Roundstone Village.

The Roundstone All Ireland Supreme Champion of Champions Pony Show is a great day out for all the family, friends and visitors to the area. We have an exceptional Show ground; a dedicated and hard-working committee and a list of honest impartial Judges who do not personally know the competitors or ponies. We also have many eminent sponsors without whom these events would not be possible. So many thanks to all that continue to support us so well and so generously. The show starts at 10.00am sharp.