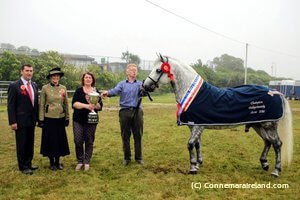 Held on the third Sunday in July, 2020 is the 35th year of the Ballyconneely Pony Show. Taking place in Ballyconneely, Co Galway, a beautiful part of Connemara renowned for its breeding of the celebrated Connemara Pony, its many attractions make it a great day out for all the family.

The event is one of the largest in the area, attracting many breeders and ponies; there were more than 340 entries last year, making the show the second largest of its kind, and every year it just keeps getting better.

With the added attractions of a dog show, a craft show and even a bonny baby competition, there is so much on offer for young and not so young.

The show is also a great opportunity for those wishing to buy a pony, and many are sold on the day. So whether you’re buying, selling or are just there for the enjoyment of it all, the Ballyconneely Pony Show has something for everyone.