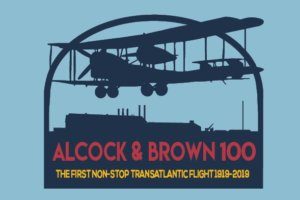 The Alcock and Brown 100 Festival commemorates the centenary of the first non-stop transatlantic flight.

The two aviators were awarded the honour of Knight Commander of the Most Excellent Order of the British Empire (KBE) a week later by King George V at Windsor Castle.

The celebrations will take place in Clifden in from 12th to 16th June 2019 and will include a range of events including;

Please check closer to the date for updates and more information.